A Message from CEO

The Foundation of Greater Montréal presents a special edition of Vital Signs™ for 2017. In this year of anniversary celebrations—Montréal’s 375th and Canada’s 150th—we decided to focus this report on children: our community’s future. The story of this accomplishment deserves to be told. 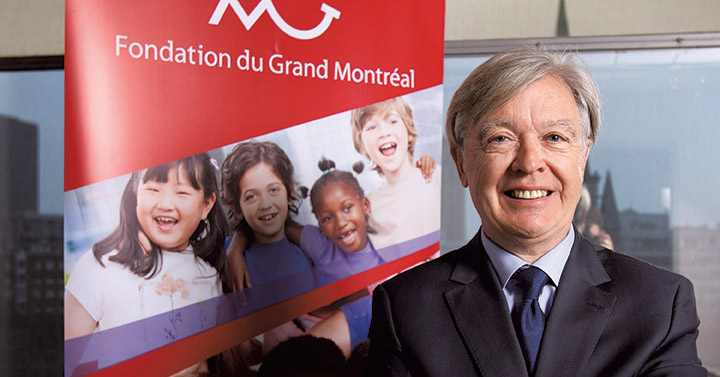 The Foundation of Greater Montréal presents a special edition of Vital Signs™ for 2017. In this year
of anniversary celebrations—Montréal’s 375th and Canada’s 150th—we decided to focus this report
on children: our community’s future. The story of this accomplishment deserves to be told.
The Foundation of Greater Montréal launched the Vital Signs™ project in December 2016, inviting
three dozen or so children’s rights organizations to share their data on young people and tell us
about the most crucial issues our children face. This report would not exist without their contribution.
From the very start of this process, we laid out conditions for success, and one of them—getting
children involved in the refl ection process—had a huge impact on how the project evolved. Six groups
of young people from different neighbourhoods and various situations (children of Syrian refugees,
children with physical disabilities, etc.) joined the Vital Signs™ conversation. Their contribution was
so great, in fact, that we decided to hold a forum on the importance of listening to our community’s children.

The publication last June of UNICEF’s Report Card 14 had a major infl uence on the Vital Signs project.
This report compares the situation of Canada’s children aged 0–17 with that of children from 40 other
industrialized countries. Its basis is the sustainable development goals that 193 United Nations member
countries adopted in September 2015. The results of Report Card 14 confirmed our hunch: when compared
to descriptions in past UNICEF reports, the current situation of Canada’s children has noticeably deteriorated.

Today, Canada ranks 25th overall for children’s well-being; in 2007, it came in 12th. Out of the 41 countries
evaluated for the sustainable development goals, Canada is 32nd for the No poverty goal, and 37th for both the Zero hunger and Peace, justice and strong institutions goals. Naturally, we had to adapt the indicators, which were designed for countries, to make them applicable at the regional level. We also had to look for studies on the situation of children, which are unfortunately rare.

The findings in this portrait of children in Greater Montréal were sometimes those we were expecting; others were surprising or worrisome.

Although 35.8% of Canada’s disadvantaged neighbourhoods can be found in Montréal, tax breaks and social transfers mitigate the major impacts of this poverty. Nearly 50% of high school students do not eat before school. Despite progress in retention at the high school level, Montréal still lags behind other regions. Girls succeed best at university, receiving 59.2% of bachelor’s degrees. Regarding access to a family doctor, only 65% of young people aged 12–19 in the Montréal metropolitan area have regular access, as compared to 94% in Toronto and 88% in Vancouver. Most schools in Quebec teach about sustainable development, but many children experience problems caused by mold in their schools and substandard apartments.

Vital Signs™ does not offer an analysis of these observations; instead, it is intended to stimulate debate
in the community of Greater Montréal. Several organizations have already announced major initiatives and we hope to see a wave of innovative projects to benefit our children. Vital Signs™ describes a multidimensional reality engaging the whole community including the children.