« ENSURE INCLUSIVE AND QUALITY EDUCATION FOR ALL »

TARGET 4.1
Ensure that all girls and boys complete free, equitable and quality primary and secondary education leading to relevant and effective learning outcomes.

SECONDARY SCHOOL GRADUATION RATE OF 61% AFTER 5 YEARS, BUT ALMOST 80% AFTER 7 YEARS

IN QUEBEC IN 2013-2014, THERE WERE NEARLY ONE MILLION STUDENTS ENROLLED AT THE PRESCHOOL, PRIMARY OR SECONDARY LEVELS IN THE PROVINCE’S 3,000 EDUCATIONAL ESTABLISHMENTS.

Of these students, 23% attended an establishment located in Montréal, 19% were in the Montérégie region and 5% were in Laval.

In the early 1970s, there were over 400,000 students attending primary or secondary schools on the island of Montréal. This illustrates the significant demographic changes that have occurred in the last 40 years.

The decrease in the number of enrolled students between 1971 and 2013 was greater in Montréal than for the province of Quebec as a whole: 46% vs. 39%. 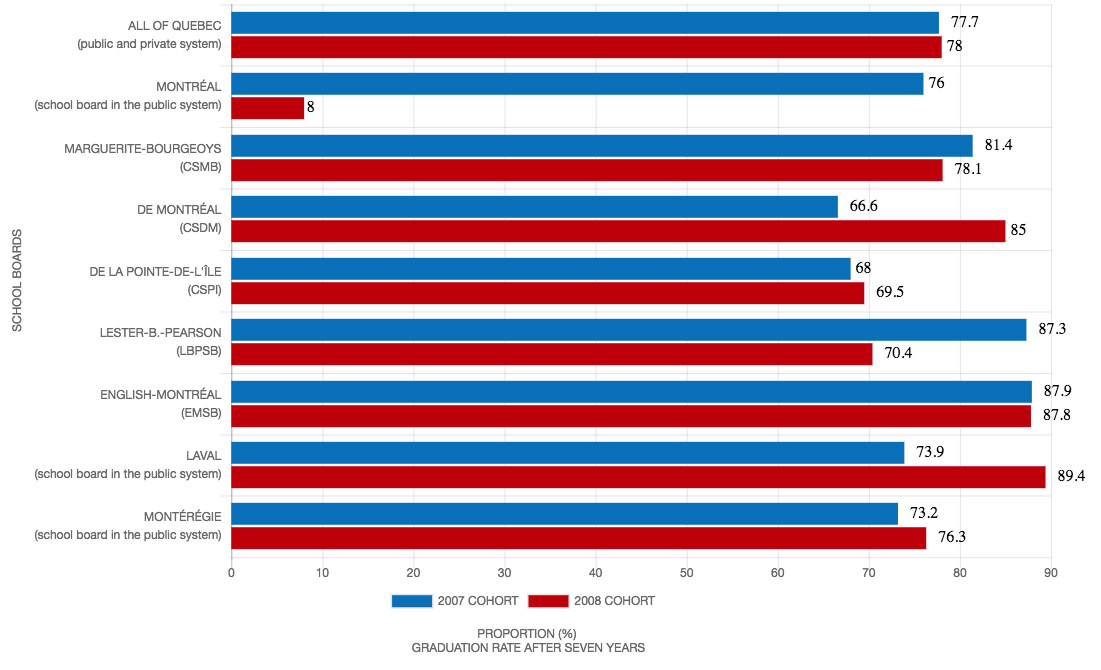 NOTE: The rate reported for all of Quebec is an overall rate that includes both public and private schools. However, the rates by school board include only public schools because the method used to calculate graduation rates cannot be applied to private schools due to their small size. The rate includes the secondary school graduation rate for that period and the qualification rate for students in the Work-Oriented Training Path. The data in this table shows the progression of the 2007 and 2008 student cohorts up to their graduation in 2013–2014 and 2014–2015.

Annual rate of students leaving the general education program without a secondary school diploma or qualification (public SYSTEM only), for all of Quebec and some regions, 2012–2013 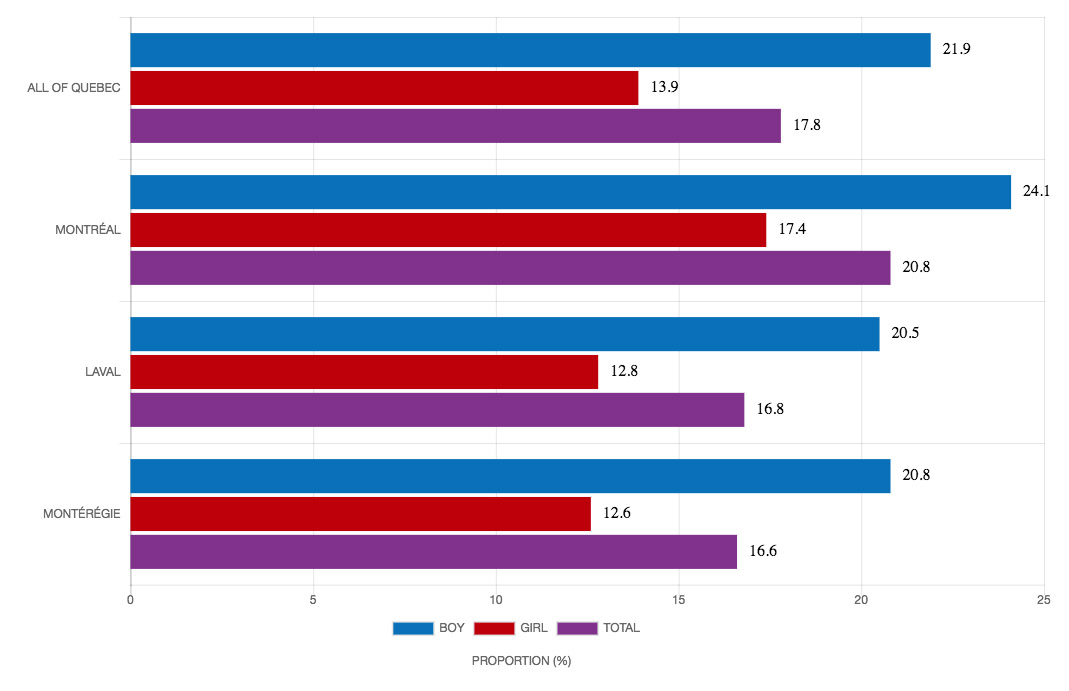 IN MONTRÉAL IN 2015, MORE THAN 60% OF STUDENTS ENROLLED IN FRENCH- AND ENGLISH-LANGUAGE SCHOOLS WERE FROM FIRST- OR SECOND-GENERATION IMMIGRANT FAMILIES.

TARGET 4.2
Ensure that all girls and boys have access to quality early childhood development, care and preprimary education so that they are ready for primary education.

PARENTING PRACTICES IN THE AREAS OF CULTURE AND DIGITAL CONSUMPTION

A 2015 SURVEY OF 1,000 PARENTS OF CHILDREN AGED 4–17 CONDUCTED BY CEFRIO SUGGESTS THAT, IN QUEBEC, THE VAST MAJORITY OF PRIMARY AND SECONDARY STUDENTS HAVE ACCESS TO AT LEAST ONE DIGITAL DEVICE AT HOME.